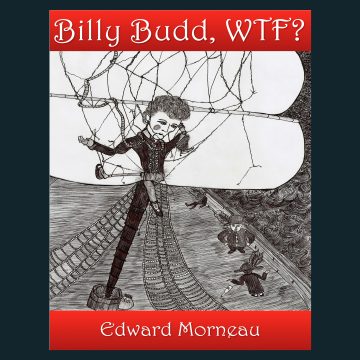 Billy Budd, WTF? is a parody of Herman Melville’s classic Billy Budd, Sailor, specifically the play adaptation by Louis O. Coxe and Robert Chapman, which strips Melville’s story to the bone in search of the mighty themes of Law, Order, Justice, Authority, Conscience, Good and Evil. Morneau dispenses with these themes and pursues more useful themes such as:

Somehow all of this comes together to entertain, to indict war and bad chowder, and bring about some of Melville’s themes in ways that perplex this writer. It’s also a musical! This is the second parody of great literature Morneau has authored. His first, “Willy Loman, Nosferatu,” speaks for itself and yet doesn’t speak at all, as it is not yet a book on tape.

A Review: All reviews have been censored by the Joint Chiefs of Staff in order to allow war to proceed undisturbed throughout history as planned.