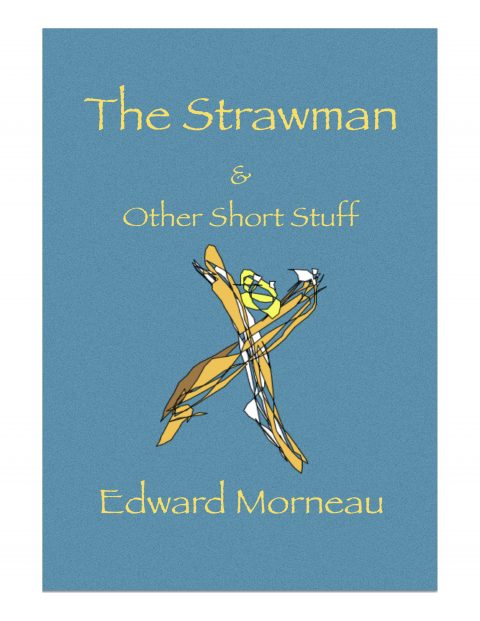 The Strawman and Other Short Stuff is a collection of fables, stories, and odd writings concocted when I was a teacher. Each story was born during ‘passing time’–that magical, restful moment a teacher has in between classes, when students are passing through the corridors of school, fetching things from their lockers, kibitzing about teenage daydreams, making out, suppressing anger and excitement, and plotting their next moments of teen engagement, or not.

When the bell rang and the kids had taken their seats, I would jot down what I was thinking during this blessedly brief lull instead of taking attendance. From these thoughts I grew these stories, proving that inspiration does not have to be stirred in the meditative presence of fire, water, or dystopian suffering.

While the title story, “The Strawman” is based on a true event, the rest of the tales are literary masques of deception. In this way, I can make big ideas appear small, important notions of life seem casual, and the general ambivalence of our lost humanity seem specific to only pre-selected characters, giving the reader a sense of dis-ownership and, therefore, safe harbor. Just kidding! These are fun stories.

Where else can you read about baseball and basic hygiene joining forces to conquer the world’s most difficult sport (“The Legend of Poopy Unders”)?

No other collection of short stories would dare to retell the story of The Tower of Babel through the young, innocent eyes of a tadpole (“The Tree Frog”).

You like Gustav Mahler (and who doesn’t?)? “Adagio” will make you laugh, cry, and wish your own life was a series of minor chords culminating in the throes of emotional wrath and despair.

If you’ve ever had residual telekinetic powers, you’ll love “Childhood’s End” (which is a true story).

There’s so much more:

A dystopian story about a society based on laundry; another tale about Broccoli Cochise and his dummy Geronimo Puck (both who had co-starring roles in “Teacher on Rye”); a serious story about the abolishment of capital punishment, a sort-of one-act Shakespearean musical about someone Orang, and two plays: one called “CSI:SUV,” and a three-act play about BFD’s, the world’s largest department store. I think. It’s all here in this one nifty book. Enjoy!