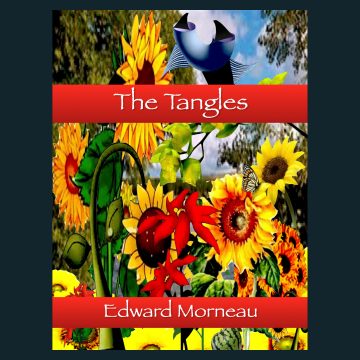 The Tangles is a novella geared to young and adult readers. It is about three eighth graders and the caretaker of Egan’s pond in Maine who discover a submerged UFO in this pond and the secrets occurring within the mysterious craft. These secrets affect the water and flora surrounding the pond in unusual ways and raise the curiosity of strangers and authorities who want to investigate these changes. To the children and the caretaker, this threatens the stability of the pond and its occupants, as well as the secret.

The Tangles has no monsters, no aliens, no dark forces, and no violence driving its narrative. But it does have a profound lesson about childhood, hope, curiosity, life, and how we are connected to our astonishing universe.

An excerpt from The Tangles

This excerpt explores a childhood event that stayed with Early Egan, the old Pondkeeper—one of only a few individuals who know of an alien craft submerged at the bottom of a small pond in Harrison, Maine. He had sensed that the neighborhood children who recently discovered the ship had finally entered it and had an encounter with something he has not been able to define throughout his adult years.

Early Egan woke from his nap and knew something was about to happen. He felt the presence of children in the pond, heading for new certainties. Many years prior, he had encountered his own ribbon-like entity, entwined with some galaxy of experience, and became all knowing. Not of information or even formal knowledge, as knowledge is fleeting, ephemeral, a conscious mist that appears and disappears with and without light; but knowing that something was present and powerful and that time was in pieces and could be understood. And that doubt had no purpose and wishing was futile, but purpose was not in doubt and nothing was futile in a universe where the pieces wanted to be put together.

He looked out of his porch window and saw the slight ripple in the wake left by swimmers moving out of his range of vision towards the center of the pond. He knew it was the kids; he knew they could never stay away—the pull of now and forever was so great. He had known this feeling for a very long time.

His earliest memory of this pull was something he heard when he was a child just shy of four years old. His father was reading a book about space exploration to him at bedtime and he asked his dad just how big the universe is. His dad closed the book and admitted that this was a tough question. “But imagine if you will,” he said, “standing on top of the tallest mountain on Earth and possessing the eyes of the most powerful telescope and looking as far into the deepness of space that you could…” He paused. “Do you know what you’d see?” Young Early’s eyes were as wide as his eye sockets would allow. “The end of the universe?” answered young Early. His dad raised a finger to his right eye: “And what do you think that looks like?” His son shook his head left to right, eyes still wide open. “You’d see the back of your own head.” And with that, his dad kissed him on his cheek. “Goodnight, son.”

For young Early many abstracts fell into place and he believed that if he could understand that and everything in between, he could understand anything if given the time. Many years later, when he first discovered the spacecraft and found himself inside, he knew that it fell to Earth for a purpose and he connected that purpose to anyone else who discovered it. The experience, he understood, was beyond mere discovery. It hinged on the doors of revelation, which was beyond the settled mind. Indeed, he was cautious because he knew some people were more than curious and that always frightened him. Barton, ER, and Jenny’s discovery of the alien ship was a profound thing to him because the spacecraft made itself visible to them. Early felt less alone with them knowing this, even more so than when his good friend, Sheriff Addison Purdy, discovered it.