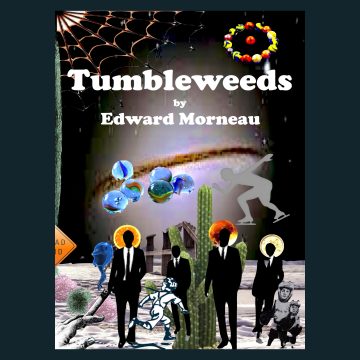 Tumbleweeds is a story about Henry Frieze, a young boy trying to get through some common setbacks he experiences during adolescence. The Frieze Family moved from Massachusetts to California in the late 50’s in order to explore new beginnings. In CA, Henry thrived. He had good friends, liked school, started to emerge as an athlete, and enjoyed life to the fullest. Except for a freak accident at the dentist’s and losing a front tooth in a friendly marbles competition, Henry’s life consisted of roller skating with his friends, chasing tumbleweeds, explore neighborhoods with his chums, visiting all the family amusement parks and beaches in Southern California, and eating too many 5 cent hot dogs. In short, Henry was a very happy boy. His parents also seemed content with their new lives and his siblings were socially invisible. His happiness prevailed no matter what happened, even to the extent that he did not notice the packing boxes piling up in the garage. Then it happened.

At school, Henry was enjoying lunch outside with his friends, when his dad’s ’57 Studebaker station wagon pulled into the school yard. With his momcaitiously approaching and whispering something that surprised Henry’s teacher, Miss Driscoll forced a smile and came over to get Henry, announcing to his classmates that he was moving back to Massachusetts and they shoud say goodbye. Shocked and speechless, Henry could not even acknowledge these friendly goodbyes of his teacher, classmates, and chums. Mute and vengefully car sick for most of the drive across country, Henry fell into a depression that betrayed his cheerful demeanor, so his family dismissed his sadness as growing pains.

In Massachusetts, Henry encountered more setbacks. As the new kid in school, he was bullied constantly and was once badgered into reluctantly fighting a sixth grader that resulted in that older boy nearly dying. Now, Henry was the school tough guy, which he hated. Eventually, Henry refused to go to school, so his parents enrolled him in a private Catholic school where things got worse.

While his parents where trying to make a go of running a grocery store, Henry longed for sunny California. Withdrawn and defeated, Henry was his encouraged by his mom him to try to make new friends. Across from his parents’ store—The Last Real One Cent Penny Candy Store on Earth—Henry saw the DPW flood the baseball park, turning it into a frozen pond. He could skate like the lightning, but had never ice-skated. So his mom gave him her white figure skates with extra socks and sent him on his way to show what real skating looks like. At the pond he was made fun of, ridiculed for his skates, and eventually walked home totally defeated…until he confessed his despair to his war hero uncle, who had been visiting his sister—Henry’s mom.

In what was a defining moment for Henry, his uncle told him the secrets he had to know as a young boy to end these traumas once and for all and to stop feeling sorry for himself. As Henry persists in honoring these new secrets, the world around him genuflects to his new resolve, and the advice he takes from his uncle and the love he finally recognizes from his parents, carries forth his adolescence into profound understandings about rites of ordinary passage that would reflect upon that extraordinary defining moment in one’s life—a universal discovery that everyone shares.