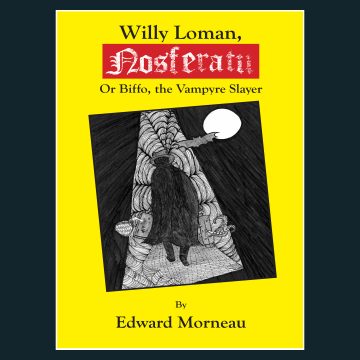 Willy Loman, Nosferatu (or Biffo, the Vampyre Slayer) is a parody of two of the most beloved American stage classics, Arthur Miller’s Death of a Salesman and Tennessee Williams’ The Glass Menagerie.

It turns out that the “Loman Line” is not Miller’s lacerating examination of the selling of the American dream and his sympathy for the soul of the everyman, but a line of the Undead (Nosferatu) that has left a ruinous legacy of lunacy and calamity behind them. Against his will and wishes, Willy Loman finds himself reanimated and seeks finality and revenge, while his two sons somehow become involved with the women of the Wingfield family from A Glass Menagerie, who have all found themselves reunited in Queens fifteen years after Willy’s “first death.” Wally of WPDP3 says, “Read the first two and cry; read the third and wonder why.”

A Review: Morneau’s special brand of humor keeps me smiling the whole time and occasionally elicits out-loud laughs. My wife asks, ‘what’s so funny’, and I would explain, except that I want to go on reading. The book is not so much a tour of the characters’ psychological landscapes, but a rich amalgamation of metaphors, references, and inside jokes (it helps to know Death of a Salesman) via the twisted highways of Morneau’s imagination. Occasionally I catch a new layer—a word play or hidden message (I think)—and I wonder how much I’m missing. This is almost like doing a crossword puzzle, except that you can work less—if you choose—and still get a rewarding payoff.