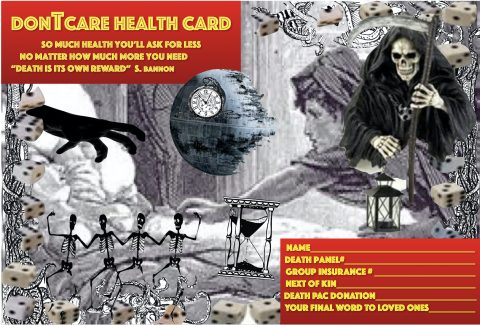 I was compelled to write this op-ed when reflecting on one of the many memes on Facebook that satirizes the freedom motif behind those who refuse to get tested, wear masks, and/or get vaccinated. This particular meme features a car in night traffic—it’s driver refusing to put its lights on. The references the driver makes to not being sheep, refusing to live in fear, owning choice, not owning the problem, disrespecting law in deference to his personal rights, invoking medical exemptions, and being a member of the Freedom to Drive in the Dark Committee are some of the same excuses for many who refuse to deal with Covid/Delta.

I guess the perpetual question is: Are too many Americans too selfish, too superstitious, and too stupid to understand what freedom is? I’m no genius and I’m reluctant to be so pointed, as I don’t ask this facetiously. I frame it as an impolite question simply because when the consequences of misappropriating freedom threatens the lives of others, maybe we should trace this misappropriation to the defects of freedom itself. Sounds awful, but I feel I’m closer to losing the essential freedom to live safely and am almost convinced that it’s only going to get worse. I am preparing for another fall and winter of quarantining. I’m lucky: I’m retired. My time is my time. However, my teacher, nurse, and public service friends are apprehensive and will soon be dreading the forthcoming calamities of public service. And now that children are increasingly vulnerable, the difficult decisions parents have of sending their children out into the world may be an existential threat to their fiscal, familial, and mental health beyond practicing mere caution on their behalf.

Under a political microscope, all things Covid/Delta reveal a dismal, growing pandemic of failure on the part of our institutions to come together and protect us from this stupidity. How can this be? We are definitely not the united states we think we are. Is this how we break apart? I, for one, right now would vote to secede from a union of such distorted basic health care paradigms. It feels like a Balkanization of national priorities and basic human principles. And this is NOT an indictment of health care workers or anybody contributing to the health and safety of those who are simultaneously concerned about their health and the health of others. It’s an indictment against those who trade in the responsibility of thoughtful, empathic choice for a self-serving contempt for those who do not hold fealty to radical conservative-driven paranoia.

The GOP is the cheerleader in this catastrophic outcome. It’s a situation that, without their belligerent opposition to all things rational, scientific, and well-intended, may have degenerated into a manageable flu that could have been held at bay, as other flus in the past have been treated. Not now. And with the planet heating up more and more every year, who knows what new pandemics are in-waiting. The more the GOP serves the needs of corporations and wealth that systematically deny the increasing pollution of this planet, the less likely ecological policy will address forthcoming environmentally-driven cataclysms. The more Republicans pander to a constituency whose conservatism operates as a bulwark against common sense, the more likely the arc of conservatism itself will move away from justice and the moral imperatives to participate in uniting an America reeling from stupidity and selfishness.

This absurd and delinquent response to a national and global crisis has put America into a focus that is becoming clear and frightening.

After decades of marginalizing science, degrading labor and manufacturing, privatizing and profiteering from healthcare, war, and military excess; outsourcing talent and commerce, insisting that living on the cheap attains a quality of life, over-consuming, under producing, resting on past laurels and our former brave inventiveness, and cultivating this absurd claim that somehow this aggregate chest beating regarding our exaggerated exceptionalism, and our refusal to acknowledge our decline, makes America the end all and be all of nations—here we are, beholden to every irrational fear and phobia of a frightened nation.

Aspects of 13th Century religious fundamentalism, political and corporate corruption, a mass media that is more a celebrity and sports forum than a source of usable and insightful news—other than the declining public education system, there is no institutional presence of the public good in America. Conservative mindsets, the unregulated greed of the marketplace, and mass indolence and stupidity have all conspired to aid and abet this current health crisis.

The silver lining: We now know that we have a Constitution that cannot reign in corruption and the ease by which private powerful interests can easily subvert its principles. The separation of powers is wishful thinking, the power of the executive branch is authoritarian, the legislative branch is paralyzed through too long a fealty to special interests, and the judicial branch is hopelessly political. The inability to indict a corrupt president is writ on a memo that did not pass muster with the approval of the republic; the 25th Amendment is useless when fealty to authority supersedes fealty to the people. Public service is now a prelude to private sector privilege. It’s good we know and better if we acknowledge this.

The best news is that what public good there is—the health care workers (not the insurance and pharmaceutical industries) have passion to save lives and sacrifice to do so. The businesses and volunteers that reach out to their neighbors without a thought of profit or acclaim—this is the beauty of community. The teachers and social workers who will find a way to help their constituents reveals that both jobs are and will always be the embodiment of the public good.

I can only hope that the market place will rise to such occasions.