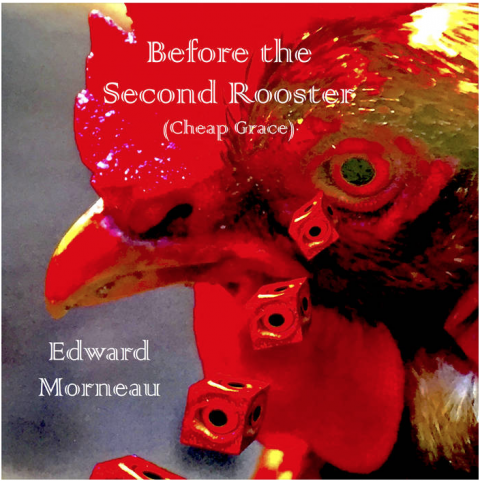 Before the Second Rooster

Note: The following songs, Soul Rendezvous (The Lobbyist’s Song), Frogs Will Never Fall from the Sky, Highway 10, Ash Wednesday originally on this CD, were re-mixed and included on the CD “Jacquerie”:

For years, when I was doing a lot of home recordings, my family used to give me weird percussion instruments for Christmas. I built up quite a collection and became very interested in percussion as a way of coloring music and sound. One instrument was this cheap metal squeeze clacker with two spring-loaded roosters hitting a small cymbal a split second apart from each other. It was beautiful, noisy and annoying.

Until “Highway 10” I never found much use for it other than to irritate my cat Louie. That song is a mess of noise— grocery bags played like accordions to replicate goose-stepping Gestapo, tea canisters full of dried kidney beans—anything that could create an atmosphere of war trash. The ‘rooster’ was used in the chorus/prayer and was a cue for Bill to put the faders up on the full complement of war…  more

Barack Obama inspired “Welcome the Waves” in his Commencement Address at the University of Massachusetts (Boston) for the Class of 2006.