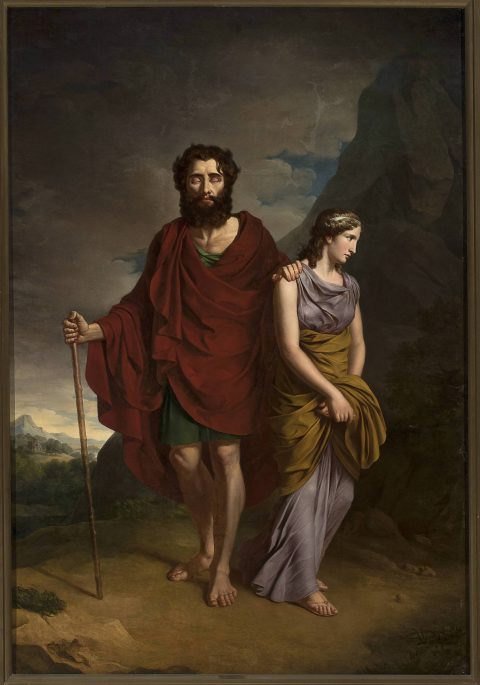 I. The Tragic Hero & War

The subjects of classical tragedy—from Oedipus, to Antigone, to Hamlet, to Lear, to St. Joan, to Elizabeth, to Catherine the Great—they all tell the stories of individuals who rise above the ordinary, make choices when the choices are not obvious, and eventually recognize (often too late) that their very substance, their blessed and tragic humanity, and their grace and regret are intertwined with their nobility and their flaws. Their nobility is not in their station but in their humility. It represents for us a model to emulate as we attend to overcoming our own flaws and common tragedies.

Joe Biden had to know his promise to bring American soldiers home was a promise that no one before him could keep. An impossible choice, certainly. To actually keep it, is nearly unprecedented in the pantheon of political choices facing those who worry only about re-elections and not the moral gravity of indecision. And for Biden to make this promise in what has generally been acknowledged as a losing effort simply does not conform to the over modulated drumbeat of American exceptionalism.

The sport of second guessing from those who embrace a political sociopathy is hardly surprising. The last brave Republican President was Eisenhower, and it wasn’t because of his substantial role in WWII; it was because he knew that the cost of every bullet, gun, tank, and missile manufactured deprived citizens of the greater substances of a truly civilized nation. He had the audacity to use his noble soldiery to warn us about military hubris and political calumny.

The condemnation of Biden by those like McCarthy, Graham, right wing and mainstream media, as well those people who post incessant absurdities about the evil of liberals and Democrats, is the reactionary petulance of a dim witted child. Forgive the child, but the adults who know better are America’s worst citizens.

Reactionaries are unable to make the difficult choices that move civilization forward. Their world is built around what comforts them and has an empty moral convenience by which they can shroud their ignorance. Moving from ignorance to recognition is part of the heroic journey. The anti-voters, anti-women, anti-science, anti-climate, anti-immigrant all remain on a path to cowardice.

And the subsequent fake outrage by those who condemn Admiral Milee for using reason, moral certainty, and fealty to the Constitution to unmask Trump’s diabolism is typical of a party that is too cowardly to invoke that very Constitution to remove such a maniac. Milee used his position to alert a country that is simultaneously one of our adversaries and trading partners—a corporatist-driven absurdity unto itself—about a lunatic president that was desperate enough to start a war in order to remain in power because of unprecedented legal struggles bearing down on him when he became a private citizen. Repeal the legal memorandum that protects a lawless president; fix the 25th Amendment to remove charlatans from power.

If we are to end as a democracy it will be at the hands of the kind of Republicanism that cannot reconcile its hypocrisy and contradictions, that pokes holes in an already porous Constitution, and that caters to the whims of corporate oligarchs.

The conservative Right and their GOP cheerleaders seem genuinely happy to beat the drum to America’s failure in Afghanistan, reducing it to one man’s failure (Biden) rather than the failure of Pax Americana. One could set the clock to the consequent recklessness of Republican policy on any given calamity regarding global hegemony; and after the sun sets on their incompetence and malevolence, the Democrats are there to clean it up, forcing them to postpone implementing their own vision for America. One could make the case that Obama’s entire presidency was about dealing with eight years of Bush’s tragic wars and his tanking of the US economy. Alas, such is the case of Biden and the Democrats trying to account for Trump’s spectacular failures and his criminally inept and corrupt administration.

The debacle in Afghanistan is a tragedy and portends suffering and atrocity. Only the most shallow, thoughtless, and fanatically doctrinaire can take the kind of joy in this tragedy that comes from pointing fingers. Unfortunately, that is the state of the conservative mind and has been throughout history.

It brings me no joy to refer to Ben Wallace, UK’s Defense Minister, who predicted all of this when Trump and the Taliban signed a “peace” agreement. Wallace considered the “agreement” one of colossal naïveté and predicted it would lead to exactly for what Biden is being blamed.

The West is baptized in Greek and Roman literature, politics, and philosophy—the virtues thereof embedded in the best of us and ignored by the worst of us. Aristotelian tragedy teaches us to weep, not gloat over tragic failure. Elos and Phobos—pity and fear—are the two cathartic outcomes that condition in us the humility it takes to recognize and mourn our tragic flaws and spend our substance seeking understanding and redemption. I find the lessons of tragedy beyond the reach of anybody who sees our failure in Afghanistan as anything but an opportunity for realpolitik. It reminds me of the political ego of fascism. For anybody who has tried to read “Mein Kampf,” Hitler’s entire book is a screed on scapegoating, political opportunism at the expense of wisdom and decency, and a primer on the unlearned lessons of tragedy.

The crocodile tears and false lamentations the GOP offer to those Afghans who helped us, and the concern for the girls and women who will be left behind, are like the thoughts and prayers offered to children murdered with guns in American classrooms: hollow gestures. I’m waiting for the GOP legislation to go back and rescue these victims of our morally bankrupt war and nation-building policies. I won’t hold my breath. The Republican Scapegoat Machine will be quick to blame Biden for the foreign and war policy disaster that is Afghanistan, but those who remember a little bit of history know this debacle was first born during the Reagan administration’s effort to aid and supply Afghanistan with weapons in its long war with the former Soviet Union, which contributed to the USSSR’s collapse and gave rise to Al Qaeda. The Russian failure was devastating, but apparently not as devastating as the American failure, according to some allies.

And our failure is even more rooted in George W. Bush’s disastrously incompetent administration, which blinked at the 9/11 intel, watched helplessly as the World Trade Center was attacked, and proceeded to invade Afghanistan and Iraq: the former with initial success and precision; the latter at the behest of the neocons—Cheney, Rumsfeld, Condi Rice, Wolfowitz, Yee and other wannabe architects of the policy set forth in Progress for a New American Century, the gist of which was: The 21 Century would be an American Century by virtue of our military presence throughout the world (600 bases and counting).

Consequent to routing out Al Qaeda in Afghanistan after 9/11, the braindead decision to invade Iraq created a tsunami of problems that metastasized into more Bush years of surges and shoddy nation building, atrocity, torture, murder, corruption, profiteering, and inspiring all manner of terrorist group resurgence, including allowing Afghanistan to welcome back the Taliban.

Elected on the promise to end this madness, Obama was advised by the Pentagon to follow up with more surges and replace soldiers with drones, further defining America as a nation that no longer desires to fight proxy wars, or no longer can fight tactical guerrilla ground wars. Tied to Bush’s negotiated withdrawal from Iraq, we exited and re-focused our hunger for war on Afghanistan. More failure. All in all, so far by 2016, sixteen useless, deadly, and costly years.

Enter Trump, who sets a policy of withdrawal from Afghanistan, signs an agreement with the Taliban (see photo above—WTF?) that Biden is required to implement, and now Biden gets blamed for that and 20 years of abject failure.

Only those who have lapsed into the mental gymnastics of selective thinking can lay this at the feet of one Presidency.

Just as the Vietnam War was a failure of perception, policy, implementation, and moral certainty on behalf of both parties over many years, our wars in the Middle East reflect the cancer of a military culture built on territorial and monetary imperatives, and not on the virtues of democracy. Both parties serve these imperatives and woe to us, as this is how empires crumble. I have no doubt that just as the Vietnam War debacle destroyed the Johnson Presidency, allowing the Nixon Administration to prolong it almost five more years, the failure of the Iraq and Afghanistan Wars will usher in political blame that the GOP will one-dimensionally aim at another convenient Democrat scapegoat. Next up? Iran.

You can’t make it sound like Blinken (or Biden) is some kind of master architect here. The Middle East Quagmire has escalated into a terrible, bloody, genocidal chess match since Carter—exasperated by Reagan, and metastasizing into an impossible dereliction of continuing special interest foreign policy. We have always been about regime change and despite the efforts to hedge our bets, whether we do or don’t, it’s always a disaster. The American Congress historically simply does not know what to do, constitutionally. The memory of long gas lines in the 70’s , OPEC owning the petrol universe since Carter, and the Pan Am terrorist attack originating from Libya, have determined all Middle East policy. You make it sound like we can snap our fingers and all of a sudden become a morally centered democracy. We are not a democracy. We’ve inched our way towards corporate oligarchy from the time Eisenhower warned us against our military nationalism. Read Chalmers Johnson’s “Blowback” series, specifically his final volume. He worked for every administration since WWII before he passed away, and he outlined American foreign policy as it has existed, not as it is imagined. Blinken is a vast improvement over Pompeo, but he is not Robin Hood, nor is the USA. It’s going to take a lot more than Biden, et al, to sanctify American hegemony to the proportion to which it can be morally defend in absolute terms, especially in a world where mostly everything has been damned by false choices and wishful thinking. The fairest policies we can hope for are ones of incrementalism regarding our global military, environmental, and food policies.