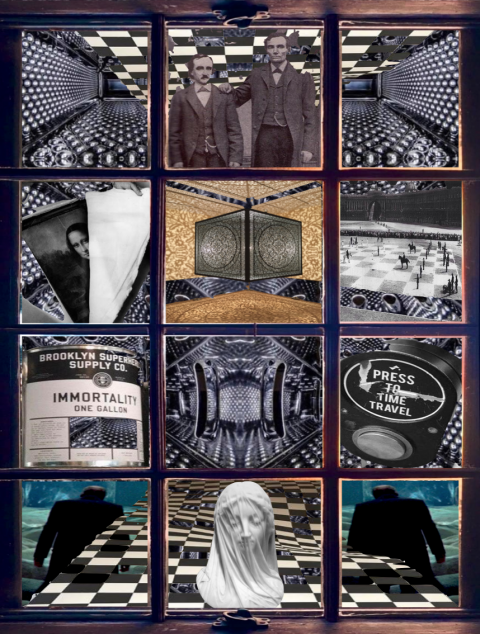 Clairvoyant goatish church let us who have ears to hear sit with the spell of our delivery by zodiac by the “ divine thrusting.” Let us leash our lobsters and be told the secrets of the seas.

This is the excellent foppery of the world, that, when we are sick in fortune,–often the surfeit of our own behavior,–we make guilty of our disasters the sun, the moon, and the stars: as if we were villains by necessity; fools by heavenly compulsion; knaves, thieves, and treachers, by spherical predominance; drunkards, liars, and adulterers, by an enforced obedience of planetary influence; and all that we are evil in, by a divine thrusting on: an admirable evasion of whoremaster man, to lay his goatish disposition to the charge of a star. –William Shakespeare, King Lear

I pledge allegiance to myself and to the universe of what makes me happy, and to my freedoms for which they stand to make sure I’m at the center of all things me, with liberty and justice for me.

One of the amendments that did not make it into the original Bill of Rights was the right to possess an IPOV. An IPOV is short for ‘Informed Point of View.” The Founders we’re puzzled by how to not only protect that right but to understand how it could be determined. One advocate argued that experience shaped an IPOV, another argued that knowledge led to its development, while others maintained that both experience and knowledge contributed to a more effective use of an IPOV.

Those opposed to this amendment said that experience is fleeting and that knowledge is a dangerous thing. “Knowledge can kill a good idea,” one Founder asserted. Another said, “Knowledge doesn’t kill ideas, people with knowledge kill ideas.”

“That’s absurd!” another Founder objected. “Knowledge informs ideas. Without knowledge there are no ideas. No ideas, no informed point of view. People without an IPOV are hardly people at all.”

Voices in the Chamber of the Constitutional Convention rose in support, urging the gathering to support this amendment as a bonafide right.

“Just a minute, gentlemen. The brew our learned colleague and dear brother, Sam Adams, has concocted for our pleasure during these proceedings, look to it for some truth: Who here has the knowledge of its ingredients? Few of us, I take. If we were to know what is in this new Meade some of us would drink it not. In this case knowledge would impede our taste. Therefore, a little knowledge might go too far.”

The gathering stirred, being careful not to guzzle down what they did not understand.

“Well, fellow patriots. We’ve just won a war against the Crown and most of us fought while stewed. I say to hell with knowledge!” said Patrick Henry.

Most cheered Patrick Henry’s now famous Epistle to Drink, but a lone voice quieted the revelry. It was none other than Sam Adams, the very brewer of spirits present: “Gentle citizens, the way this amendment is presently written—‘Congress shall make no law prohibiting the People from acquiring an informed point of view’—maybe it can mitigated as follows: ‘Being necessary to the Idea pertaining to the idea of Idea, Knowledge well regulated shall not infringe on the right of the People from acquiring an Informed Point of View’. “

What seemed a reasonable compromise to the assembled statesman was tragically dashed when a drunken Minuteman accidentally shot Adams as he was hoisting a brew to his own invention.

Woke up, got outta bed, “This is ‘Merica–” that’s what he said. Found my way downtown, I saw some smoke; somebody spoke and I saw it was steam. It was Trump and his stupid hat. He went on about this and that. Held the Bible up–was this a joke? Wake up, ‘Merica–have a Coke.