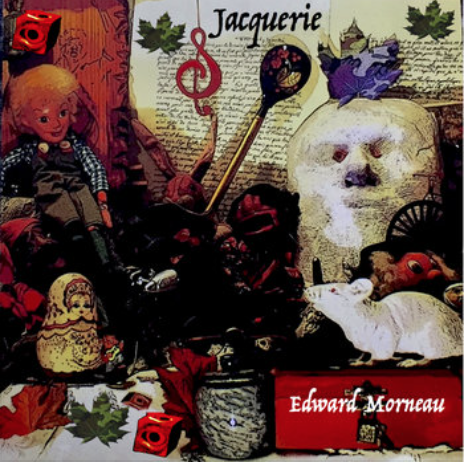 Jacquerie is a compilation of re-mixed songs from Trepanning and Before the Second Rooster, plus two new pieces.

Jacquerie is dedicated to my friends Roy and Millicent (Millie) who commissioned this compilation and supported the political spirit of these songs, as well as the outrage over what happened to America under the Bush administration.

These are new friends I met at a wedding a several years ago. Roy and Millie regaled me with stories of their own political activism during the days of Vietnam, Civil Rights, Nixon and Reagan, and railed against Bush with such conviction and distemper that I had to send them Trepanning and Before the Second Rooster— two previous CD’s I did with equally foul temperament concerning conservative politics and abuse of power under the Bush years in America. Within a few days of receiving them, they emailed me their excitement over the songs, which was an important validation for me.

They were clear, constructive, and critical, telling me what worked, what didn’t, and what they thought I should do. They suggested I choose the songs I believed were the best from each CD, keep the whole thing under an hour, and consider re-mixing songs I had talked about fixing.

I thought Bill Mason did a great job re- mixing what we had, patiently making and integrating the changes I wanted, and mastering the whole shebang. Nephew Dave created a compelling, ominous introduction, and I decided that a new tune was appropriate for this collection.

Right around this time I returned to the classroom part time and was teaching Charles Dickens’ A Tale of Two Cities, which I hadn’t read since high school. The book spun my head around. Though the story itself is the compelling core of Dickens’ effort, the despair of the underclass, the indifference of the wealthy, the hypocrisy of the church—all these things reminded me of so many chapters of the 20th Century and of certain empty pockets of time in economic 21st Century America.

I’m no revolutionary, but I want my songs to have meaning, to have power, to even suggest revolt and revulsion over injustice. Jacquerie is a second chance to do that and I thank Roy & Millie for their generous support and shared outrage. Jacquerie would not exist without them.

From “Selection”: Sleep makes the poor Shepherd equal to the King”: Stanislaw Lem (from his novel, Solaris)

End Narrative from “Cathedrals of Sticks & Pin”s: Through our eyes the universe is perceiving itself; through our ears it is listening to it cosmic harmonies. We are the witnesses through which the universe becomes conscience of its glory, its magnificence.: Alan Watts;  (Voice & sea sounds patched together from Werner Herzog’s Encounters at the End of the World)

Video for “The Day the Birds Stopped Singing”:

Jacquerie is a collection of lyrics and short annotations regarding the CD of the same name. The CD Jacquerie is a compilation of songs from two previous CD’s, called Trepanning (out of print) and Before the Second Rooster, plus two new songs, an experimental instrumental of found sounds (“Jacquerie”) and a new XTC-influenced tune, called “Cathedrals of Sticks & Pins.”

All of Morneau’s work from this era reflects a deeply lyrical consideration of how America’s shift to the Right during the Bush II administration threatened aspects of its Constitutional democracy, its core cultural beliefs, and the moral corrosion of its institutions, especially the media. The specific focus of most of the songs is on the wars in Iraq and Afghanistan, the heartbreak and effect of personal oblivion of 9/11, the distortions of faith through the exploitation of religion, the abandonment of principles personified by a nation’s response to those affected by Hurricane Katrina, and an examination of the soul itself and its capacity for self deception.

The dark matter of its lyricism is countered by the sweet melodies Morneau creates and the attendant pop-folk and sometimes avante garde musicality he embroiders to soften these hard observations. The topics are difficult and dated, and it is the risk of any artist to anchor his work in history, but Morneau explicitly thinks that it is the responsibility of artists to characterize the history they occupy through the expression they can summon to give meaning to the times. 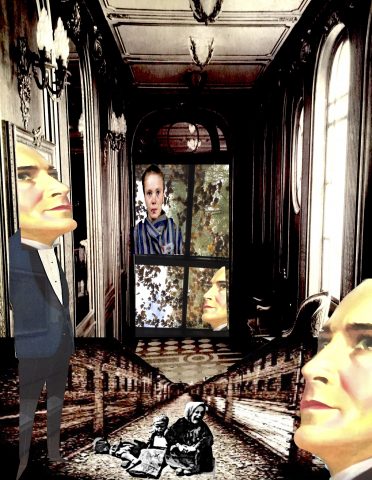 I have been studying the Holocaust since high school and have never been fully able to accept the capacity even one human being has to inflict such brutality on another, and the capacity another human being has to survive such brutality. I cannot begin to conceive of the conscious mechanisms of the collective will of the state to persecute and murder such large numbers of people.  Yet, just as the Holocaust happened in all of its misery and horror, genocide continues to plague humanity in various incarnations. Therefore, we must make a more profound effort to understand our proclivity for genocide.

Genocide always introduces itself to us through fascism. One of the things I cannot accept today is our collective inability to see fascism approaching, even as it manifests itself in new forms, in different uniforms, using folksy slogans and unrelenting lies for sinister purposes and deceptions. What is the nature of this blindness? Why do we welcome the sonneteers of fascism before the hard poetry of their song hollows out hate from us and leaves love and life abandoned? In James Moll’s The Last Days, Hungarian Holocaust survivor Alice Lok asks, “What do our books teach us?”

As a teacher I often taught William Golding’s Lord of the Flies as a Holocaust allegory. In a BBC interview, Golding revealed that his masterwork was a microcosmic reflection on World War II and, in particular, the capacity people have to do the most unimaginable things given a certain set of circumstances. He went on to assert that “there existed a little Nazi in all of us,” and that “political nostrums” and privileged social rank have very little to do with our capacity to behave with civility or savagery when certain conditions that threaten our security prevail. His book then bears this out in frightening and heartbreaking detail as the children pursue their own form of island fascism, where justice, safety, freedom, choice, and survival itself are confiscated in the name of absolute power. It’s one of the many books that serves as a warning to the literate masses that the frail nature of humanity is vulnerable to totalitarianism, and that the less vigilance we practice, the more peril we invite.

I wrote “Selection” from the idea of revealing the final moment of the confiscated soul, where the inventory one makes of one’s life before annihilation is unable to resonate with hope, with innocence, and with anything consecrated with the idea of democracy, justice or faith. This must be where many Holocaust victims found themselves in their final seconds, unable to reconcile on any level the rationale of their tormentors with any estimable essence of their own deaths. Death before dying. The bitter observations that are collected in the verses and the tender warnings of the chorus are dissipating mists merely sniffed in by the beasts that bloat themselves on the hatred that slaughters the lambs. I can only guess this is how Primo Levi felt.

Perhaps the worst thought of life is to be indifferent to one’s own death. Death before dying. That has to be the greatest act of inhumanity the Nazi’s delivered upon the Jews and all others who perished in their camps. “Selection” is the endgame of the hopelessly indifferent under the boot of the mercilessly uncivil. It is the unraveling of the individual in the face of certain mob annihilation. It is the systematic confiscation of the cell’s instinctive drive to rebel and survive, leaving the cell to decay, unable to replicate, to rally. It is the warning that the mindless, unquestioning giving into power is the giving into oblivion; and within the darkness of oblivion are the accompanying fire and ashes, the triumph of the irrational, and the desperate hope for permanent sleep of the condemned and appalled. As the final choice, it is the final giving in to a secondary world without pain, without betrayal, without any reconciliation to the problems of life. Death before dying. It is a wished for suicide built on a long life of witnessing the creeping personal and national political nihilism that metastasizes in full view of the bystander; a longing to receive the knockout punch, to end it all so that one can utter in the last breath, in the vacuum of the unconscious language of denial, that at least the ‘I’, the ‘ID’, the ‘Superego’ took no part in its own respective selection and destruction. How can certain annihilation be otherwise? Isn’t the tiniest speck of consciousness beholden to the consideration of its own demise? If you factor in the death of children, the end of innocence makes more dark the fiction of civilization and makes hard rain out of the mist of doom. It is a death before dying.

We sit on the fence of a broken dream temperance house
We sit on a jury of peers and then we look down
In a nation of laws it’s the choice of thieves
To steal away promise and leave us to grieve
For the past that was split by an arrow to keep you from me.

What’s in a name, in a place, or in a street?
Nothing’s forever in the station where we will meet
You can cut us in half, you can make us all numb
When you give us the choice we choose to be dumb
When it’s time for selection, will we choose by our feet?

Mothers and children don’t move from the light
A darker commandment comes in from the right
I am the lamb who gives up the fight
To the lion who seeks much more.

I knew a girl—she was different, so she disappeared
I looked for her—maybe I didn’t— I’m not sure if I cared
She was my sister, she was my mom
She made me a jacket when I came undone
I don’t remember for her if I shed any tears.

Mothers and children don’t move from the light
A darker commandment comes in from the right
I am the lamb who gives up the fight
To the lion who seeks much more.

You can’t see it coming, it’s like boiling a toad
In prayer we pray for the things we think we are owed
We turn from our neighbor when things don’t go right
We hide under blankets to wait out the night
It’s too late—the kettle is boiling, it’s going to explode.

Oh, the clouds—they roll heavy, and the river is ashen white;
The fields bring sunflowers that reach into the night
And the cart the hunchback pushes is loaded to the rail
Its cargo smells of such bitter fruit, time and reason fail.

When the clouds fall hard from heaven and the water swallows light,
When the flowers kill the honeybee, it’ll whet my appetite
For the rapture and the calling, for a shot inside the ring,
“For sleep makes the poor shepherd equal to the king.” *