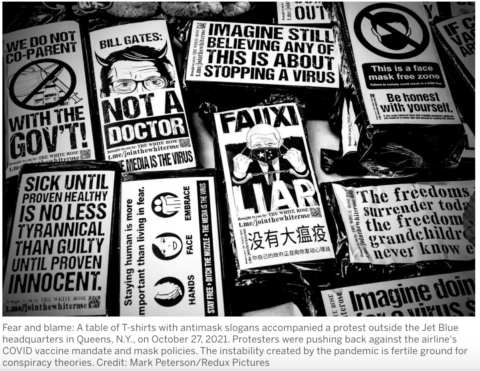 I was reading an article published in the March 2022 issue of Scientific American (SA), called “The Lab-Leak Hypothesis Made It Harder for Scientists to Seek the Truth,”1 and came across a term called “self-sealing,” which, as explained by authors Stephan Lewandowsky, Peter Jacobs, and Start Neil, is the cognitive perpetuation of conspiracy theorists: “One of their hallmarks is that [conspiracy theories] are self-sealing: as more evidence against the conspiracy emerges, adherents keep the theory alive by dismissing contrary evidence as further proof of the conspiracy, creating an ever more elaborate and complicated theory.” This is a typical conspiracy theorist’s response to scientists who engage in what is natural to the scientific process itself. Specifically, when science revises or rejects failed hypotheses, a regular feature of experimentation and accumulating additional evidence to refine a scientific theory emerges to refine that science. Change apparently frightens conspiracy theorists, as they seem to want black and white revelations, literally and figuratively.

Please continue with the following PDF: