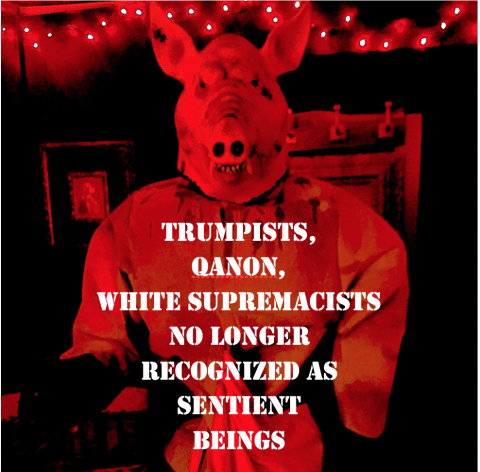 The United States government has officially excluded extremist conservatives— including Trumpists, QAnon, White Supremacists — and radical derivatives — such as the Ku Klux Klan, Proud Boys, Oaf Keepers (sp?), and dozens of other hate groups — in its “Human Welfare Non-Sentience Bill.” This means they are no longer recognized as “sentient beings” in the the USA.

The move comes from the results of a common sense assessment carried out by a team of psycho-historians led by Dr. Arthur Science, an associate professor in the Piedmont School of Hyper-Political Philosophy, Logic, and Scientific Method, renown for advocating aggressive leukotomies for the politically brain dead. They looked at over 300 studies and found “strong scientific evidence that extremist conservatives have devolved into non-sentient beings.” Sentience is a subjective concept that’s been debated for centuries, but it generally refers to the capacity to “consciously perceive feelings and sensations like pain.” Unlike sentient beings, political non-sentient beings suffer from a near total absence of common sense, justice, empathy, and relevant reflective vocabulary (e.g. Is the plural of oaf—‘oaves’?), but have excessive reservoirs of emotional reactionary glands.

There is some consensus that political non-sentient beings can be re-classified as non-vertebrates (animals without a backbone). Non-sentient beings have previously had difficulty being recognized as sentient because the central nervous system of non-invertebrates is permanently nervous and is immensely different from that of vertebrates. For instance, rabid Trumpsters have a donut-shaped brain in their head—the “donut hole,” if you will, having the similar gravitational pull of a cosmic Black Hole, whereupon entering such a void, all reality disappears. (In the study, one subject [patient MTG] was determined to have multiple donut holes in her head.) However, this doesn’t necessarily mean their central nervous system isany less complicated than certain mammals considered sentient by researchers. If you’ve watched the documentary, My QAnon Teacher, you’ll know that non-sentients can be incredibly conflationally trollful, capable of some remarkably simple-minded reasoning and having a toxic aversion to recognizing self-parody, including waiting for the Kennedy’s to resurrect in Dealy Plaza to guide and assist them and the Oaf Keepers (sp?), et al, to install the Orange Messiah to his “rightful place on the loo of American power.” There’s also some evidence that some non- sentients feel a sense of regret knowing they lived their lives as human centipedes.

“The amendment will […] help remove a major inconsistency: non- sentients and their brood have been protected through GOP and conservative political diabolism for years, but have not received any perceivable protection from each other until now. One way the USA can lead on non-sentient welfare is by encouraging self-herding among incurable non-sentients, bringing them together to commiserate ad nauseam on vaccines, Hunter Biden, gun-laws, AOC, etc, by moving them to a safe area somewhere—maybe Wyoming—where seldom is heard a discouraging word and the ‘clouds [sic] are not cloudy all day.’ Maybe by releasing them into the wilds of their own political sanitarium, they will find the freedom they so crave to meditate on their own moral dereliction. By isolating and protecting these invertebrate non-sentients from sentient common sense, we can completely disregard them,” Dr. Science said.

The review also recommends forbidding non-sentients from using a variety of current structural practices, including prohibiting non-sentient access to social media and not allowing them to terrorize elderly town folk who work the polling stations. By encouraging non-sentients to express extreme laughter at some of their own invertebrate luminaries (Marjorie Taylor Greene, Josh Hawley, Kevin McCarthy, Tucker Carlson, Ted Cruz, et al)— all who have forced them into a future predestination of binging on covfefe—self-mockery may hopefully restore some aspect of their understanding of Orwellian irony and rank Calvinistic hypocrisy.

The US government has promoted this as “leading the way on non-sentient welfare,” although its news statement points out that the change won’t immediately affect existing legislation or industry practices regarding how non-sentients are treated before the self-herding takes place. For now, it remains legal to ridicule, be repulsed by, and feel full-blown existential dread that free-roaming non-transients are still among us. It will, however, be taken into account when shaping the legalization of sentient animal welfare in the future, as most rational sentient beings feel as if they live in a slow-boiling pot of lobsters. A number of other countries have taken similar steps in recent years. For example, the practice of giving non-sentients a place to graze and frolic with each other, unencumbered by reason and empathy, has been legal in Switzerland, Norway, Austria, and New Zealand for many years. Peter Jackson’s tender film, Let Them Be, evokes the blessings of creating a non-sentient settlement, uncluttered by reason and logic. The movie’s soundtrack features the inspirational hit song, “The Long and Whining Road.” Despite this legislation, as with all good ideas, this bill will unfortunately suffer a crushing defeat in Congress, as non-sentient invertebrates have voted into power other non-sentients without knowing why. “Until common sense and decency are resuscitated as a virtue in America, sentient human vertebrates may find themselves facing a worst fate than the non-sentients who stubbornly resist shepherding themselves to mental health,” worries a concerned Dr. Science.