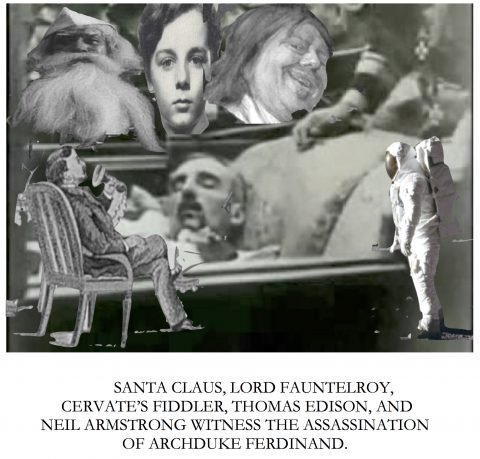 I’d like to coin a new term—Afternews—the assumption of news that will happen without any viable proof that it will happen. It places reality in the hands of profit-driven media organizations that theorize what news is to come, and by that exercise, creates and perpetuates a reality based on wishful thinking—the greatest wish being stories sensational that attract viewers and, therefore, more commercial revenue. Afternews turns out to be news they can rely on to happen and happens because they have wished it so. And when it happens, the media culture of “we told you so” parades itself by claiming “first to know” and, in ad nauseam, revels in the sweepstakes of “you heard it here first.”

It’s a brilliant but cynical cycle of gathering news from the terrible non-science of opinion, which is too often based on half-wit punditry and polling, an inexact science that is growing more suspect, as objectivity is replaced by the subjectivity of the misinformed.

I respond to polls regularly and am never asked by the pollsters where I get my source of news, what is my education or expertise level, and how involved I am in actualizing my values regarding issues. If I polled an epidemiologist I could safely assume that he has achieved an acceptable level of education, expertise, and experience regarding epidemics, and that his value system reflects an professional ideology to “do no harm.” If I asked an epidemiologist who was running for Congress who knows that a sizable number of his voting constituents know nothing about pandemics, but substitute some notion of freedom as a a way to not acknowledge the seriousness of pandemics, that candidate may have to adjust his entire ideological character accordingly to appeasing that voter. After all, a voter need only by 18, be registered, be a citizen, and show up. A very low bar, considering how important voting is.

Afternews, I fear, is already informing the outcome of the 2022 and 2024 elections. Republicans are salivating at the prospects of regaining control of both houses and the Presidency and punishing, censuring, and firing Democrats from every committee in sight, seeking revenge wherever they can find it. Makes me wonder what they actually do for a living and why we actually pay them a salary for doing nothing but contributing to the spectacle of petulant behavior that ignites Afternews in the first place.

For their part Democrat pundits seem to buy into that fear, giving Afternews a “fait accompli.” Panic based on a fear that’s based on Afternews seems to be creating desperation, and this desperation can only lead to more Afternews.

I’m not sure how much we can rely on mainstream media to abstain from Afternews, but we as voters must come out and vote. That’s a low bar we fail to cross each mid-term. Not to feed the Afternews beast, this midterm may be the most important election of our time. It would be tragic to see the likes of Marjorie Taylor Greene, Lauren Boebart, and Paul Gosar rise from the regurgitation of that beast.