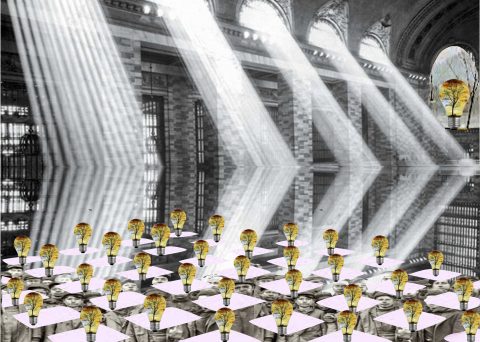 (The following is cobbled together from several professional development workshops on writing I had attended over my thirty-five years of teaching. It is a fairly basic approach and should be adjusted according to the needs of the assignment, the rhetorical requirements of the form, and the demands of time, creativity, subjectivity and objectivity.)

There is some mystery to writing, but not enough to prevent even the most reluctant writer to attempt writing on some meaningful level. The problem with writing is usually located in thinking. Like a computer, we process thoughts much, much faster than we can write them down. Yet, we never admit to that. Instead, we begin writing as if we have sorted out all our thoughts into meaningful expressions. We’ve got to give ourselves a break. There’s no way our writing skill, or even handwriting, for that matter, can keep up with the rapid firing of our thoughts. Like all successful thinking, we have to admit there’s some kind of process to writing. Weirdly enough, there is; and even weirder, it’s called the Writing Process. Here are the steps:

1. Pre-writing: Brainstorming: The brain does not think in terms of complete sentences. We think in terms of images, observations, ideas, facts, visuals, places, figures, and perceptions—random information. Choose a topic. For as long as it takes, but for at least 15 minutes, write down EVERYTHING that comes to your mind when you think of that topic. Don’t write sentences. Write words, phrases, draw doodles, anything—just get it down in a list as fast as you can. And do it in a place that has no distraction. Shut the TV off! Give your brain a chance to stretch and not be distracted.

2. Pre-Writing: Clustering: Organize this list into some framework of relationships, patterns, similarities, shared values—anything that LIBERATES an item from your list and PARTNERS it up with a like concept.

3. Pre-Writing: Narrowing the Topic: After you cluster your original list, you may find things no longer useful. Put them aside. You may find that your original topic has initiated thoughts on a more refined topic, or a different topic entirely.

4. Pre-Writing: Refining: It is possible to spend much time clustering and narrowing your topic down to the point where you are generating many lists and clustering those lists into a very detailed topic. THAT’S THE POINT! We often give up on writing because we feel we have nothing to say. We have nothing say mostly because WE HAVEN’T THOUGHT ABOUT IT.

5. Pre-Writing: Point of View: Here’s a bit of magic. Most writers write from their own point of view, which makes sense. It’s their experience; it’s their words—what else is there to do? Imagine writing from a different point of view. Some topics allow you to do this. Most great fiction writers choose a persona—a direct descendent of the point of view. For instance, in Ken Kesey’s One Flew Over the Cuckoo’s Nest, Kesey writes from the point of view of an Indian who is pretending to be deaf and mute. Because of his self-imposed silence, he cannot utter his outrage. As a result we get to see how his interior mental experiences tell of the horrible dehumanizing conditions in an insane asylum. In the film version, the director tells the same story from the point of view of a loudmouth, wisecracking, charismatic rebellious character, played by Jack Nicholson. Nicholson’s colorful portrayal makes a serious book a funny, but still touching movie. One may disagree with this approach, but it certainly is another point of view.

6. Writing: Drafting: After you have clustered your thoughts, narrowed and refined your topic, and explored a point of view, it’s time to start writing. DO IT IN LONGHAND. Word processing fools you into thinking that whatever you write looks finished. It’s not. It’s an illusion. The computer has ruined many a potential writer. Don’t worry about grammar and spelling—all that can be fixed in proofreading and subsequent drafting. Organize your writing according to ideas. Paragraphing is a handy way to keep similar ideas together.

7. Proofreading for Content: It’s insane not to read what you write. 50% of your errors can be encountered immediately in a first proofread. Get a trusted friend to read it, and another 25% of your errors can be eliminated. Read it out loud, or get a friend to, and you’ll hear the rhythm of your sentences, what makes and what doesn’t make sense, and the general effectiveness of your effort. Make sure your friend is honest. Buy her an ice cream.

8. Drafting: A good piece of writing NEVER happens in a first draft; SELDOM happens in the second; and starts to take on real quality by the third draft. Do as many as you can. I’d say the third draft is the one you word process. You may need the psychological reward of a polished-looking draft after doing all this hard work.

10. Final Drafting: It’s called polish. You’ve put so much work into this thing, you’d better finish it off with some class. Do a final proofread. Have someone who is lovingly tough on you read it one last time ALOUD. Deal with the final criticisms. Correct them. Be sure to submit according to how your teacher wants you to submit it (font, size, spacing, titling, etc). Submit it with pride. You never know—you may be a writer. Remember:

It’s the writer who makes the rules.