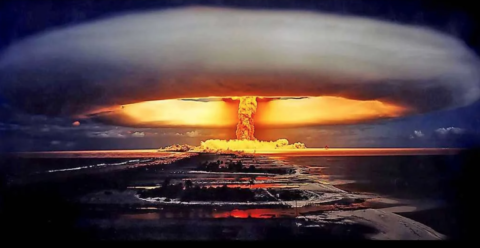 The threat of nuclear war after the second world war was consigned to a policy called MAD—Mutually Assured Destruction. MAD is an apt acronym, as surely it would be an act of madness to provoke a nuclear war. The Cold War simply remained “cold”—the inferno of nuclear annihilation inconceivable to the statesmen and stateswomen who proffered this agreement between the former USSR and the USA.

It seems, for now, that this MAD agreement is holding up, even while Russia’s tactical invasion of Ukraine persists. The great irony is that another madness has been unleashed, and that is Russia’s unrelenting war crimes against Ukrainian citizens. Despite the international agreements and courts of international law that condemn war crimes and crimes against humanity, Putin remains unmoved, denies these crimes that are obvious to anyone in that world that possesses a cell phone, and is determined to annihilate Ukraine in order to save it from… what? Nazism? It’s too absurd to contemplate. But there’s something equally absurd.

On “60 Minutes” last night (4/9/22), journalist Scott Pelley asked Voldymyr Zelensky pointed questions about what else needs to be done to help Ukraine vanquish the Russian threat. While the Ukrainian President understands that creating a no-fly zone is an invitation for Russia to go nuclear, and as the USA is the power to enforce this no fly zone, this would be an overture to World War III, which would most certainly test MAD and possibly result in a nuclear exchange. It’s a stalemate with unique and unanticipated consequences: the war crimes, the cruelty, and the wanton destruction of Ukraine will continue no matter how many more sanctions are imposed and no matter how many tactical weapons are supplied to the Ukrainian military.

The subtext of almost every answer Zelensky gave to Pelley’s direct questions was that the policy of MAD permitted all of this tactical madness. MAD has become MAB. MAB is not a real acronym, not yet. In this case it refers to Queen Mab, from Shakespeare’s “Romeo & Juliet.” From English folklore, Queen Mab is the sly midwife to fairies who inhabit the deepest desires of men in the form of dreams—the queen of wishful thinking. In the speech, there is a reference to how Queen Mab jostles the dreams of soldiers

And then dreams he of cutting foreign throats,

Of healths five-fathom deep; and then anon

Drums in his ear, at which he starts and wakes,

And being thus frighted swears a prayer or two

The good soldier prays for victory, for a nobility to his effort, to return home to peace and normalcy. The bad soldier prays for blood, and for the bystanders to let him do what monsters do for the sake of blood. Holocaust scholars recognize that the bystander allows the monsters to be monsters. MAB: The acronym: Mutually Assured Bystanders. That’s what Zekensky sees, despite the sympathy of the world. We recoil at the cutting of throats, the breaches of safe passage for the innocent, the annihilation of hospitals and schools—all of it is worthy of our tears, outrage, and support… and wishful thinking.

MAB is the new calculus for any nuclear power invading a non-nuclear one. The trillions of dollars invested in nuclear arsenals now seems like a poor investment for peace and a good excuse for new theaters of war to dismiss MAD as a noble gesture in an increasingly ignoble world that can count on MAB. Who could have imagined that during the Cold War?

There was no resolution in Pelley’s interview, except for that which is obvious: Whatever Zelensky wants, he should get—as quickly as possible.